Let Y_1, Y_2 be discrete random variables. The joint probability distribution for [latex] Y_1, Y_2 is given by

The function p(y_1, y_2)   will be referred to as the joint probability function. [referred by Mathematical Statistics with Applications]

The below can be satisfied.

Let's see an example. Let the total probability space be S = {middle school 3rd grade students in Seoul} and Y1 represents favorite idols while Y2 represent the place where they are live. Y1 has three elements {'BTS', 'EXO', OTHERS', Y2 has two elements {'NORTH', 'SOUTH'}. Then we can assign some joint probabilities for each outcomes (Y1, Y2). 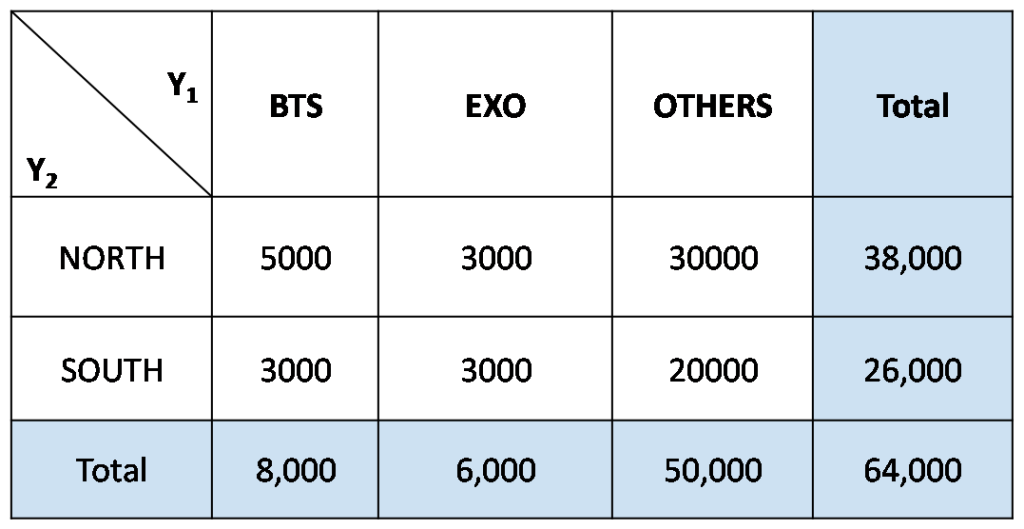 You can answer the below questions.

The answer of the last question is  3 / 64. Please examine that.

To induce the result by using the chain rule, joint probability function can be thought as an consecutive trials.

we can think about that y followed by x or vise versa.

I would not introduce the concept of Joint Probability Density Function here. Rather than that I want to explain the chain rules by using joint probability considered as 'consecutive events'.

At the first step,

At the second step, we derive the equation carefully given x,