The previous post was dealt with likelihood . Let’s take a look at some interesting examples introduced in “Major League Baseball statistics”. (Book in Korean)

The R markdown can be found in Github  and this post is quoted partially from chapter 4 in the book mentioned above.

1. The probability that goes on the base twice in five at-bats given a on-base percentage.

Joey Votto has fabulous on-base percentage at 2015′ and 2016′ season. At that time he got along with Mr.Choo Shin Soo so that he was also well-known in Korea. It is expected that he will be success going on base with 46%. Usually he would get 5 times at batting as a 2nd or 3rd at batting order. Then, what is the probability that he might go on base twice at a game?

First of all, I would really explain the on-base percentage (abbr. OBP) for whom doesn’t know the meaning of it.

The On-Base Percentage is,

It is a percentage how much a hitter can go on-base. It’s said as On-Base Percentage and its abbreviation is OBP. Usually the first hitter in a team may need the high OBP. It can release a tension for the next hitter as well as affect the opponent to feel somewhat pressure.

OBP is the probability can be defined in the ratio of success going on-base to the total attempts at-bats. When we say a probability, we should deal with its probability distribution.

If you have some knowledge in statistics, you can assume the OBP (On-Base Percentage) followed as binomial probability distribution with p as success probability. So many trials are independent each other and the probability of success will be p and the one that fails is 1-p.

If we assume k successes and n-k fails, we can derive the binomial probability distribution function such like this.

Joey Votto is 2nd in batting order so that he used to be 5 opportunities at-bats at a game. Considering his OBP, it is highly expected that he would be going on-base at twice. In the other hand, it’s very rare chance that he would not be on-base or success on-base at all times. If you can think of that, you seem to describe the binomial distribution in your mind.

On the behalf of direct calculations, we can make a simulation with random seeds with OBP. 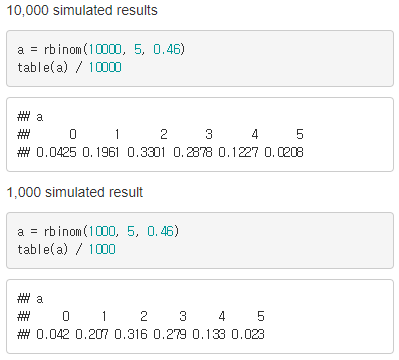 We found that it is almost the same result we have derived from the equation (*).

2. Maximum Likelihood Estimation; To find the OBP which maximizes the probability of going on twice in five at-bats

The biggest difference from the probability is that the probability is that you know the on-base percentage, which is the condition of an event (two outs in five at-bats), so you can notice the frequency of two occasions in five. But if you do not know the number of on-base percentage, you have to find the conditions that make the most frequent outbreaks out of five times. That is the likelihood.

From now on, substitute the total number of trials 5 and 2 into the binomial probability distribution function to find the on-base percentage parameter that most improves the likelihood of going out twice in five at-bats.

(OBP = On Base Percentage)

If we differentiate the equation by OBP,

We obtained the mathematical value that I thought intuitively. 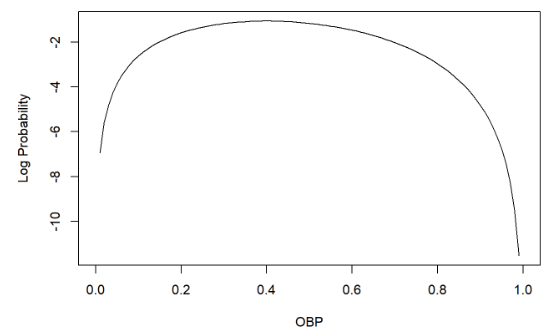 The player with a OBP of 0.4 will be the highest, with 34.56% of the probability going twice in five at-bats. (Following binomial distribution)

It is calculated for six cases in below,

After displaying it with a bar graph, the third bar (when going twice) is the highest, with a slightly tilted distribution to the right. 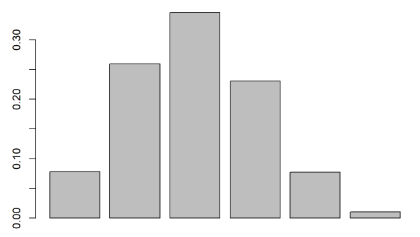 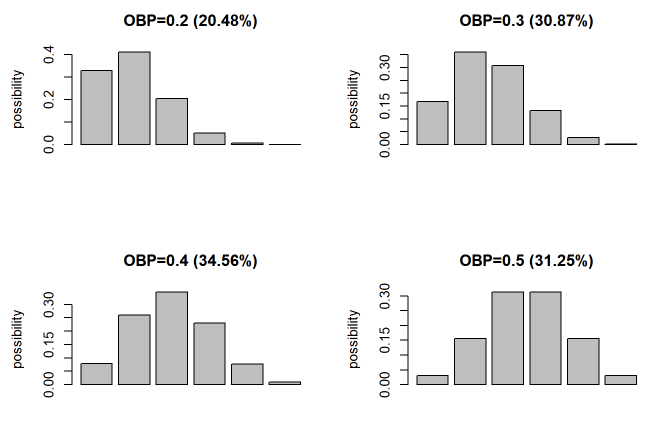 4. If a player runs 100 games and we observed the each game’s going on-base counts, how we can get the maximum likelihood estimation of parameters ?

If we assume  P_{OBP} as a player’s OBP which is a parameter of our population, the likelihood can be written by

If we reflect the number of counts of the six on-base cases through 100 observations (competitions), the likelihood function can be obtained as follows.

If you take logs on both sides and organize them,

If you take derivative by  P_{OBP}  and set it to 0 and organize it, 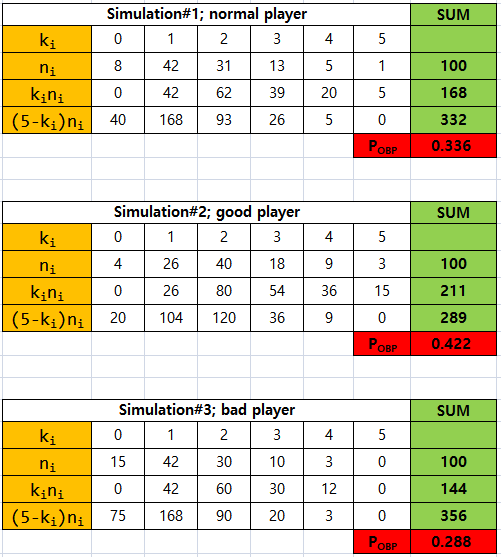 Assuming the binomial probability distribution function with P(OBP) and the number of times on-base(k) according to the number of at-bats (n) as parameters, I could estimate the OBP which is parameter of population by changing the observation counts at 100 games from the method of maximum likelihood estimation.