From below I’ve quoted some paragraphs from page 59~page 70  directly in the ISLR book.

Recall the Advertising data from Chapter 2. The figure below displays sales for a particular product as a function of advertising budgets for TV, radio, and newspaper media. Suppose that in our role as statistical consultants we are asked to suggest, on the basis of this data, a marketing plan for next year that will result in high product sales. What information would be useful in order to provide such a recommendation? Here are a few important questions that we might seek to address: 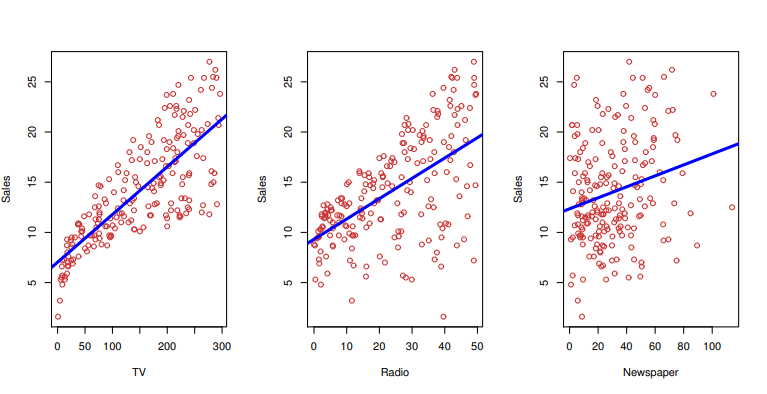 It is a very straightforward approach for predicting a quantitative response Y on the basis of a single predictor variable X. It assumes that there is approximately a linear relationship between X and Y. Mathematically, we can write this linear relationship as

\beta_0 and  \beta_1 are two unknown constants that represent the intercept and slope terms in the linear model. Together,  \beta_0 and  \beta_1 are known as coefficients or parameters. Once we have used our training data to produce estimates \hat{\beta_0} and  \hat{\beta_1} for the model coefficients, we can predict future sales on the basis of a particular value of TV advertising by computing

The least square approach chooses \hat{\beta_0} and  \hat{\beta_1} to minimize the RSS. Using some calculation, one can show that the minimizers are

3.1.2 Assessing the Accuracy of the Coefficient Estimates

Fundamentally, the concept of these two lines (population regression line vs. least squares line) is a natural extension of the standard statistical approach of using information from a sample to estimate characteristics of a large population. For example, suppose that we are interested in knowing the population mean \mu of some random variable Y. Unfortunately,  \mu is unknown, but we do have access to n observations from Y, which we can write as y_1, y_2, \cdots, y_n , and which we can use to estimate  \mu . A reasonable estimate is \hat{\mu} = \hat{y} , where \hat{y} = \dfrac {1}{n}\sum^n_{i=1}{y_i} is the sample mean. The sample mean and the population mean are different, but in general the sample mean will provide a good estimate of the population mean. In the same way, the unknown coefficients \beta_0 and \beta_1 in linear regression define the population regression line. We seek to estimate these unknown coefficients using \hat{\beta_0} and \hat{\beta_1} given in (3.4). These coefficient estimates define the least squares line.

The analogy between linear regression and estimation of the mean of a random variable is an apt one based on the concept of bias. If we use the sample mean \hat{\mu} to estimate \mu , this estimate is unbiased, in the sense that on average, we expect \hat{\mu} to equal \mu . What exactly does this mean? It means that on the basis of one particular set of observations  y_1, y_2, \cdots, y_n , \hat{\mu} might overestimate  \mu , and on the basis of another set of observations,  \hat{\mu} might underestimate  \mu . But if we could average a huge number of estimates of  \mu obtained from a huge number of sets of observations, then this average would exactly equal  \mu . Hence, an unbiased estimator does not systematically over- or under-estimate the true parameter. The property of unbiasedness holds for the least squares coefficient estimates given by (3.4) as well: if we estimate \beta_0 and \beta_1 on the basis of a particular data set, then our estimates won’t be exactly equal to \beta_0 and \beta_1 . But if we could average the estimates obtained over a huge number of data sets, then the average of these estimates would be spot on! In fact, we can see from the right-hand panel of Figure 3.3 that the average of many least squares lines, each estimated from a separate data set, is pretty close to the true population regression line. 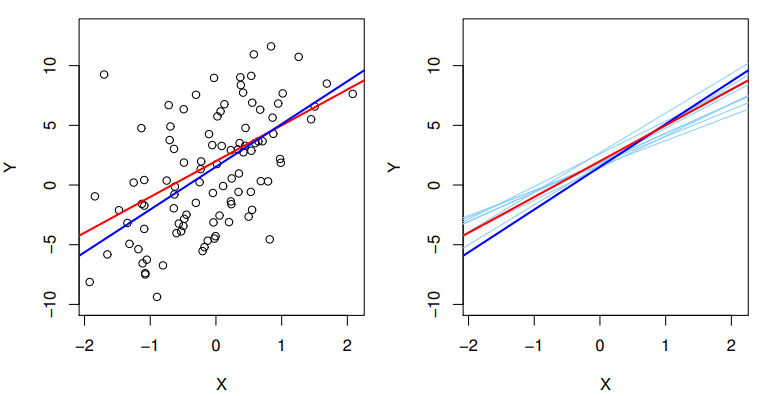 We continue the analogy with the estimation of the population mean \mu of a random variable Y. A natural question is as follows: how accurate is the sample mean \hat{\mu} as an estimate of \mu ? We have established that the average of \hat{\mu} ‘s over many data sets will be very close to \mu , but that a single estimate  \hat{\mu} may be a substantial underestimate or overestimate of  \mu . How far off will that single estimate of  \hat{\mu} be? In general, we answer this question by computing the standard error of  \hat{\mu}, written as  SE(\hat{\mu}). We have the well-known formula

,where \sigma is the standard deviation of each of the realization y_i of Y. (This formula hold provided that the n observations are uncorrelated.)

For these formulas to be strictly valid, we need to assume that the errors \epsilon_i for each observations are uncorrelated with common variance \sigma^2 . This is clearly not true in Figure 3.1, but the formula that SE(\hat{\beta_1}) is smaller than when the x_i are more spread out; intuitively we have more leverage to estimate a slope when this is the case. We also see that  SE(\hat{\beta_0}) would be the same as  SE(\hat{\mu}) if \bar{x} were zero (in which case \hat{\beta_0} would be equal to \hat{y} ).

In general, \sigma is not known, but can be estimated from the data. This estimate is known as the residual standard error, and is given by the formula RSE = \sqrt{RSS/(n-2)} . Strictly speaking, when \sigma^2 is estimated from the data we should write \widehat{SE}(\hat{\beta_1}) to indicate that an estimate has been made, but for simplicity of notation we will drop this extra “hat”.

That is, there is approximately a 95% change that the interval

will contain the true value of \hat{\beta_1} . Similarly, a confidence interval for \beta_0 approximately takes the form

H_0 : There is no relationship between X and Y

versus the alternative hypothesis

H_a : There is some relationship between X and Y

Mathematically, this corresponds to testing

(3.14) will have a t-distribution with n-2 degrees of freedom. The t-distribution has a bell shape and for values of n greater than approximately 30 it is quite similar to the normal distribution. Consequently, it is a simple matter to compute probability of observing any value equal to |t| or larger, assuming \beta_1 =0 . We call this probability the p-value.

3.1.3 Assessing the Accuracy of the Model

① Residual Standard Error (RSE) :
Recall from the model (3.5) – Y=\beta_0+\beta_1X+\epsilon – that associated with each observation is an error term \epsilon . Due to the presence of these error terms, even if we knew the true regression line, we would not be able to perfectly predict Y from X. The RSE is an estimate of the standard deviation of \epsilon . Roughly speaking, it is the average amount that the response will deviate from the true regression line. It is computed using the formula

Note the RSS was defined in Section 3.1.1, and is given by the formula

② R^2 Statistic :
RSE provides and absolute measure of lack of fit of the model (3.5) to the data. The R^2 statistic provides an alternative measure of fit. It takes the form of a proportion-the proportion of variance explained-and so it always takes on a value between 0 and 1, and is independent of the scale of Y. To calculate  R^2 , we use the formula

The R^2 statistic has an interpretational advantage over the RSE (3.15), since unlike the RSE, it always lies between 0 and 1. However, it can still be challenging to determine what is a good R^2 value, and in general, this will depend on the application. For instance, in certain problems in physics, we may know that the data truly comes from a linear model with a small residual error. In this case, we would expect to see an  R^2 value that is extremely close to 1, and a substantially smaller  R^2 value might indicate a serious problem with the experiment in which the data were generated. On the other hand, in typical applications in biology, psychology, marketing, and other domains, the linear model (3.5) is at best an extremely rough approximation to the data, and residual errors due to other unmeasured factors are often very large. In this setting, we would expect only a very small proportion of the variance in the response to be explained by the predictor, and an  R^2 value well below 0.1 might be more realistic!

The  R^2 statistic is a measure of the linear relationship between X and Y. Recall that correlation, defined as

is also a measure of the linear relationship between X and Y. This suggests that we might be able to use r=Cor(X,Y) instead of  R^2 in order to assess the fit of the linear model. In fact, it can be shown that in the simple linear regression setting, R^2=r^2 .